Who Invented Wigs? (History of Wigs) 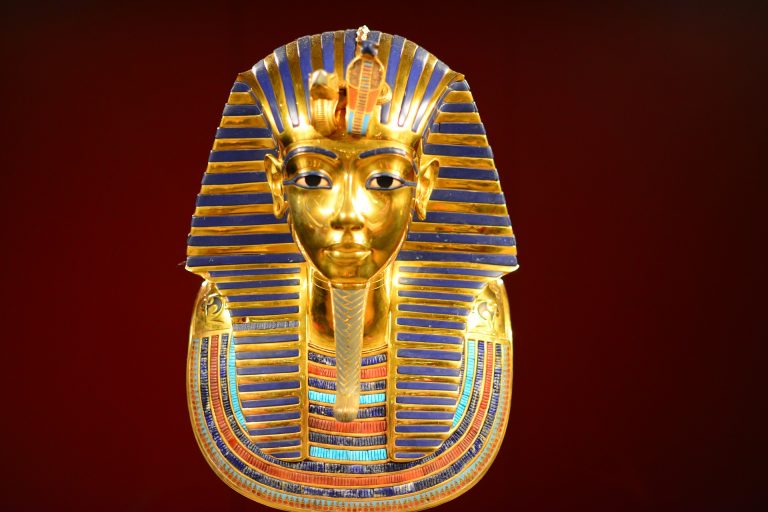 The oldest wigs on record date back to Ancient Egypt, the Ancient Egyptians created wigs to protect their head from the extreme heat and sun.

However, the modern, powdered wig rose in popularity due to one man alone – the 17th-century reigning monarch of France, King Louis XIII.

Allow me to introduce myself, my name is Lori, and I am a wig and hair extensions whipping, history buff with a penchant for going down the rabbit hole when it comes to questions like “where did that come from” and “why do we do things like this”?

So today, I’d like to invite you to follow me for a trip down the dark path of human history, where we will discover the origins of wigs and how they’re still popular today.

Excited? Read on to discover more about the origins of the wig.

Long before Lady Gaga took the stage as our modern-day wig royalty, the Ancient Egyptians wore wigs and hair extensions of all shapes and sizes.

The oldest hairpieces discovered by Egyptologist Dr. Joann Fletcher at the manual workers’ cemetery at Hierakonpolis can date back to 3400BC.

Those Ancient Egyptians seemed to have life figured out pretty well back then. They prioritize having fun, relaxing, enjoying life, and having a good old party.

As such, they bathed daily, wore perfume, used breath mints, and had a massive wig collection to rotate through.

Because if you stay ready, you don’t have to get ready (to party, that is).

As a Symbol of Wealth and Power

According to Archaeologist Geoffrey John Tassie, in his article “The hairstyles represented on the Salakhana Stelae“, he suggested:

“Hairstyles as a ‘representation of self’ were an integral part of the generation, maintenance and structuring of Egyptian society… Wigs were valuable items, only available to those of means.”

The affluent Egyptians had the funds to afford human hair wigs, and the Egyptian nobles even had wigs made from different metals that were encrusted with jewels.

No part of the face was safe from these metal hairpieces, even the gentlemen of the court would wear beard-wigs made out of metal and bedazzled with sparkling gems.

One handy positive from wearing a wig is protection from the fierce Egyptian sun.

Another is instantly being recognized as “one with more money” by the type of wig you are wearing, and what it is made from.

Lastly, the ultra-hygienic Egyptians hated vermin such as head-lice. A shaved head and wig negated this problem entirely.

Wigs in Ancient Egypt were made from human hair, wool, precious metals, and even plant fibers, depending on your class. They have also dyed a myriad of jewel-toned colors, so if you think Cardi-B invented the rainbow haired trend?

I’m here to tell you to crack a history book and look back to the Egyptians for some of the ultimate ‘lewks’ that are coming back into fashion today!

Other than Ancient Egyptians, Ancient Europeans and Asians also wore wigs as well.

Unlike the Egyptians, the Ancient Romans tendency toward long hair and even had barbers who would cut the latest style for them when they came into the shop.

It’s widely believed that Julius Caesar wore a wig to hide his baldness. Wigs were also common to signify status or profession in Ancient Rome.

Yellow wigs, for instance, were worn by prostitutes to advertise their profession.

Roman women tended to wear elaborate wigs made from human hair, which was usually shaved from the heads of slaves. Roman men in power would wear their hair close-cropped to show their dignity and control.

Other ancient civilizations such as Greeks, Assyrians, and Phoenicians believed that balding was a sign of physical impairment, so men wore wigs to hide their “shame” and to show their unending virility.

Women from these nations tended to stack the wigs up high to create towering hairstyles.

One of the Ancient and longest-ruling cultures that survived until recently was China’s dynasties. Ruling for more than 2’000 years and only falling from power in 1911.

The earliest record of Chinese people wearing wigs and hair extensions (鬄、髢 in Chinese) can be found in the “Shijing“, which contains the oldest chronologically authenticated Chinese poems. Most of the pomes were collected during the Western Zhou period (1046–771 BC).

More elaborate hair and wigs came into fashion during the Tang Dynasty (618-907 C.E.). Marriage ceremonies in particular, saw a rise of hairpieces, wigs, ornate combs, and fresh flowers come into the forefront of Ancient fashion trends.

The Ancient Chinese believed that your skin and hair were passed down to you via your ancestors. These gifts were to be treasured and given the utmost care.

Convicted criminals were shamed by shaving their hair off and so dishonoring the blessing bestowed by their ancestors.

In Ancient Japan, wigs (かつら) were mentioned in poems dating as far back as the back as the 7th century.

Further evidence corroborates this in records between the 8th and 9th centuries. Records show that the Emperor and noblewomen were using wigs, hairpieces, and extensions for the more elaborate hairstyles that were at the height of fashion in that time.

Later on, in Ancient Japan, wigs were mentioned repeatedly when talking about lower working classes, such a Kabuki actors.

Due to the wonderfully bio-degradable nature of human hair, we can find little evidence other than pictures and paintings of the gravity-defying hairstyles of the time.

In 17th century Europe, humans were, for want of a better word, disgusting.

Unhygienic, unwashed, and quite unprotected in all aspects of their life, syphilis tore unchecked through many European cities and towns.

And it wasn’t just the common people contracting this disease. Scandalous rumors ran rampant that the King himself had contracted syphilis and was trying to cover up the evidence, quite literally.

One of the symptoms of syphilis is premature hair loss in unsightly patches. So when King Louis XIII started sporting an array of wigs, more than an eyebrow was raised.

At that time, the fashion was for men to wear their hair very long and tied back. Even if a nobleman was going through completely natural balding, suspicions were raised, and judgment cast that they carried the untreatable disease.

So King Louis XIII pioneered a way to cover up hair loss and the questions regarding their health, and the gentlemen of the court followed suit quickly.

As mentioned above, the 17th century was an unhygienic time in Europe.

Bathing happened once a year, if at all, and hair was not washed.

Lice, bed bugs, and a pungent smell coming from people and the open sewers that ran through the streets were common.

Shaving one’s head and wearing a wig instead counteracted lice and that particular “hair” smells quite well. This was probably another reason the wig rose in popularity so quickly. That and the fact that greasy, dirty hair is quite a chore to style.

When King Louis XIII decided, he went at it with gusto.

Once he decided wigs were the answer to his hair-loss woes, he ordered 48 wigmakers to start on his image-saving quest.

The king’s social status assured by his guaranteed good-hair days, the men of the court followed on, and the wigmakers soon found that business was booming.

By 1673, the first independent wigmaker’s guide was created, and the high standards of wig making were set.

Other royals that accessorized their wig with a crown included Louis XIV and Charles II, who both lent towards powdered wigs.

Since then, the powdered wig has become a staple in Europe and is still a sign of power and justice.

You can see this confirmed in any courtroom in England, where to this day, judges and barristers still wear wigs. Such a trend has spread to different British Colonies too.

In America, four presidents were wearing wigs: John Adams, Thomas Jefferson, James Madison, and James Monroe. George Washington did not wear a wig, but he did powder his hair!

Across the English Channel, during the French Revolution, it became very dangerous to be seen as royal or have anything to do with the nobility. Powdered wigs were cast aside for natural-haired wigs, which leads us gracefully through the history book pages to today.

Flicking through a magazine, you can see a myriad of natural hair wigs worn by chameleon-like celebrities daily.

From Cardi-B to Kylie Jenner, from Ru Paul to Sia; wigs, hairpieces, and extensions are still in fashion and are not going out of style anytime soon.

For those who are fighting ill-health and disease-related hair loss, a wig is an easy solution and a lifeline to claiming back their self-esteem and self-confidence.

There are many reasons why people choose to wear wigs in this day and age, but we all have our Ancient ancestors to thank for keeping the wonderful world of wigs alive and well through so many centuries.

Here are some quick answers to commonly asked questions relating to the question “who invented wigs?”.

When Was the First Wig Made?

The earliest wig was allegedly made in Ancient Egypt circa 3400 B.C.E.  Allow me to save you a Google search, that was over 5400 years ago.

Who Made the First Lace Front Wig?

That would be King Louis XIII. His 40 wigs from his many illustrious wigmakers were the pioneers in today’s lace front.

Thanks to King Louis XIII, the lace front wig rose in popularity in Europe and North America and is still seen gracing the heads of stars and celebrities around us today.

Why did they Wear Wigs in Early America?

In colonial times, Americans wore wigs to distinguish the different classes at a glance.

Judges and military officers were the only ones allowed to wear white wigs.

Here is a fun video about wigs culture in Early America.

Who Was the Last American President to Wear a Wig?

Born in Virginia on the 28th of April 1758, President James Monroe was the last American president to wear a wig while he served in office.

He kept up with the latest 18th-century fashion by wearing a tricorn hat, and even knee-breeches.

So, back to the question, who invented the wig? If you ask me, the Ancient Egyptians did invent the original concept of a wig.

But they were held on with honey and were ornamental in nature. The wigs were made with many types of materials, and it’s rather like comparing a wooly mammoth to an elephant.

Definitely related but certainly not the same. Who invented the wig we know today has to be King Louis XIII.

He is undoubtedly the father of the modern wig and the man I thank every Comic-Con and Halloween for the perfect end to my particular outfit.

We have produced some great articles about interesting facts relating to wigs and hair extensions. Keep reading if you want to learn more!