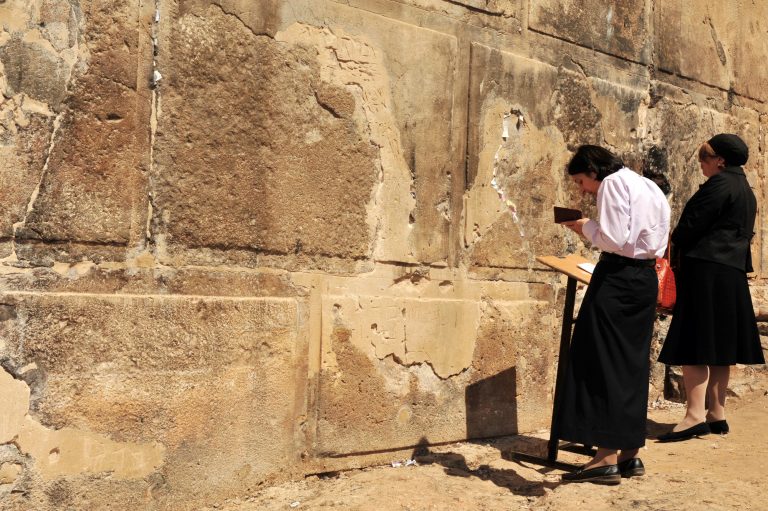 In reality, the matter is fairly controversial and still unclear. It is rooted in an ancestral interpretation of the law of the Torah (the biblical book of the Old Testament).

Startled, a bit? Welcome, then! I am Rosalba, a passionate wig lover with a flair for the history of head coverings. I have spent several weeks studing the relationship between Orthodox Jewish women and wigs.

In this article, I explored the religious and customary reasons behind the usage of wigs in the community of Jewish women.

If you are ready to know more, keep reading…

The religious theory affirms that many orthodox Jewish women wear wigs to comply with a biblical obligation contained in the book of Torah.

The biblical episode regards the ritual of Sotah, a ceremony to verify the fidelity of a woman accused of adultery. During this ritual, the priest uncovers the head of the adulteress, as a humiliation for her marital unfaithfulness.

By contrast, hence, a Jewish woman who wears a head covering proves her marital status and fidelity to her husband.

Currently, in fact, this biblical tradition has given rise to the custom of wearing wigs, hats, or other head coverings to indicate that the wearer is a woman belonging only to the man she married.

That is why wigs and other hair toppings are worn only by married Jewish women.

However, scholars and historians don’t find any connection between this custom and the Bible, especially with the Mosaic law, where the rules were particularly stern for women.

The Mishnah, indeed, a collection of the oral Torah, does not recognize any biblical origin to this obligation, which, in turn, is mandatory only for married women.

Moreover, in the past, Jewish women didn’t wear real wigs, but other kinds of head coverings, such as scarves, chadors, turbans or handkerchiefs. These hair coverings had to hide women’s hair, completely, or partially, according to, respectively, the Jewish and the Babylonish Talmud.

Over time, and due to the Rabbinic interpretation of a few biblical verses, which considered women’s hair as sexually attractive, the usage of head coverings (to avoid adultery) became very common among married observant Jew women, giving rise to the concept of modesty.

This concept evolved over the centuries and has been subject to the free interpretation of the local Jewish communities. But, how did this evolution lead to the custom of wigs for the Jewish women? Follow the subsequent paragraph to discover it.

The Origin of the Custom to Wear Wigs

Today, many Jewish women wear wigs. These hair tools are called “sheitels” in Yiddish, more commonly known as Kosher or Jewish wigs. The latter started being used as fashion tools to mimic the hairstyle of the French women in the 16th century, and as a sort of rebellion against the Rabbinic law.

Rabbis, indeed, denounced this custom, but this rebellion has continued until today, even though, fortunately, modern Judaism does not require women to wear head coverings in their daily life.

However, a few synagogues still ask married women to wear head coverings or a scarf before praying in a Jewish church.

In many Jewish communities around the world, women do not wear wigs.

The custom survives among the more conservative and orthodox communities, where married women wear head coverings not to expose their natural hair in public.

However, currently, observant Jewish women wear wigs as an essential tool of their daily life.

While unmarried Jewish girls wear wigs only for practical problems, such as hair thinning, medical conditions or hair loss, married Jewish women wear wigs to respect the Judaic concept of modesty. But what is modesty for these women?

Let’s explore the answer below.

Wigs and Modesty in the Jewish Tradition

Many Jewish women cover their heads with wigs, when they are married.

They belong, in fact, to the most conservative Jewish community called Hasidic or Orthodox.

Jewish women interviewed affirmed that they wear wigs for a matter of modesty. For them, this word does not mean being less attractive or hiding their natural beauty.

Their wigs, indeed, are cute beauty tools that have nothing to envy to other popular Western wigs.

When they wear a wig, they mark a border, or a distance, between their soul and strangers.

It is as if they said: “I don’t belong to you, my true essence belongs only to myself and my beloved ones…”.

In this case, even though the wig is more seductive or attractive than their natural hair, it means these women show their true hair, or, rather, their true personality, only to the closest relatives.

With this custom, hence, the concept of modesty does not reveal a messy appearance, but privacy. With a wig, a married observant Jewish woman protects only her private life. with a wig

To further respect the Judaic tradition, these women wear only Jewish wigs made by Jewish manufacturers.

This is always a rule coming from an interpretation of the Torah, according to which, a Jew is forbidden to wear products linked to idolatrous processes, such as human hair coming from poor Countries and sold to wig manufacturers to make a profit.

The only human wigs they wear are the ones of Jewish donors and certified by Jewish manufacturers.

Usually, the certificate says that a Jewish wig respects the Torah law.

This way, these women comply with the most ancient and orthodox rules of their tradition.

But, aside from the certificate, what are the differences between Jewish and normal wigs?

Go to the latest paragraph to find the answer.

The main difference between a Jewish and a common wig is that the former is more durable, because it must respect the principle of the Rabbinic law, namely not being made for mere purpose of fashion or short consumption.

For this primary religious rule, human hair Jewish wigs have high quality and resistance, and are more expensive.

As you can see, the custom of Jewish women does not exclude the concept of beauty. Conversely, their religion enhances, and considers charm and beauty as God’s gifts.

These gifts must not be wasted or humiliated, and, maybe, Jewish wigs serve just to protect these priceless values.

Let me know if you agree with me.