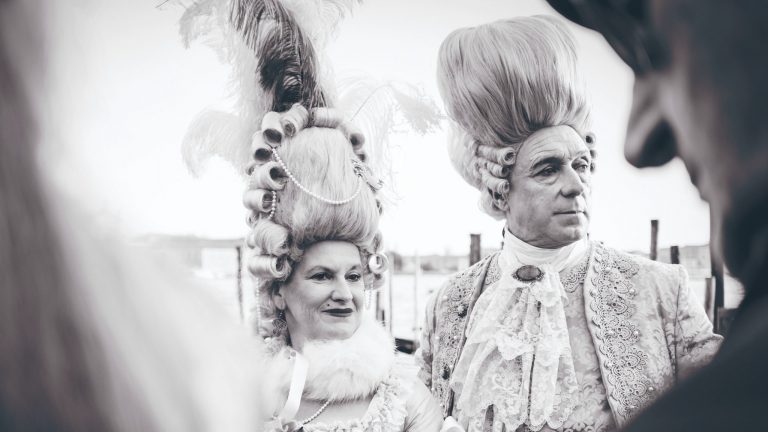 In this article, we will talk about why people wore powdered wigs.

I am Lori, and I love wigs and history a lot, plus I have a few very close friends who are lawyers. Recently, I have spent around 27 hours learning about the development of wigs and hair extensions. The powdered wig is a big part of it.

In this article, I will talk about why and when powdered wigs became popular, who was wearing them, and why powdered wigs go out of fashion.

Why did People Wear Powdered Wigs?

Thanks to Syphilis, poor hygiene, and 2 Kings who wanted to cover the truth, powdered wigs were all the rage since 17 century. Yes… not a very beautiful picture.

By 1580, before antibiotics were discovered, syphilis has replaced the Black Plague and became the worst epidemic in Europe. Patients were suffering from sores, blindness, patchy hair loss.

At the time, hairlines were everything, a long, good hair was a “must-have” of a well-bred man. If you are suffering from baldness and hair loss, people will associate you with syphilis and that’s a big shame.

Since then, men have started wearing wigs to cover their baldness. However, it didn’t become the trend until King Louis XIII and King Charles II started using wigs.

By 1655, King Louis XIII in France started suffering from hair loss when he was only 17 years old. So he hired 48 wigmakers to make a wig (originally named as “periwig”) to cover his baldness. He had 45 wigs, most of the time, he changed his wig several times a day.

One for breakfast, one for lunch, one for concerts, and more for other activities…

Five years later, King Charles II from England, started to wear wigs because his hair started to turn greyish, which is also a sign of syphilis. Since then, the fashion trend of wearing wigs was born, from King, courtiers, and aristocrats to upper-middle-class merchants, are hooked on wigs.

Another important reason why people loved using wigs was that it saved wig-users from head lice. It took a lot of time to pick the nit out of people’s natural hair. But for wig-wearers who have shaved their head for fitting the wig, it’s a lot easier.

All they needed to do was, send their wig to a maker and they would boil the wigs, remove the nits and it’s all fine again. Well, yes, very different from how we wash and clean up our wigs nowadays.

Take a look at this fun video about the history of wigs.

What is a Powdered Wig?

At the very beginning, wigs were made from goat, horse, and human hair. However, because these wigs were not properly washed and most of them smelled horrible.

In addition to the reason that syphilis patients want to cover the bloody scores on their faces, they tended to use finely ground lavender scent starch to “powder” their wig.

Wigs became signs of flaunting wealth for people with status, from Kings, Princes, nobles, to judges and lawyers, there were all wearing wigs. The term “bigwig” started to be used for describing people who can afford sizeable and nicely made wigs.

Most of the British colonial governors, European Kings, Queens, and Nobles are likely to wear wigs, and a lot of early American politicians and men with white hair wore wigs.

For sure, at the very beginning, syphilis patients who can afford a powdered wig will choose to wear one as well.

From this clip taken from Joe Rogan Experience #1272 w/Lindsay Fitzharri, you can get to understand better about people wearing powdered wigs and the wig wearers in the 17th to 19th centuries.

During the French Revolution, the citizens ousted the wigs because it was considered a sign of nobility.

By 1795, William Pitt the younger, levied a hair powder tax (Hair Powder Act of 1795), wig users are required to purchase a certificate that cost around USD 100 or more today to purchase hair powder, unless they can prove that that met certain qualification, such as being part of the royal family.

Since then, powdered wigs have stepped out, and natural hair became the new fashion trend.

Here are some quick answers to questions relating to powdered wigs.

When did Powdered Wigs go out of Style in the US?

By the end of the 18th century, Powdered wigs used by men and powdered natural hair used by women went out of style in the US, natural hair started to become the new trend.

Since then, powdered wigs are no longer been part of a full dressing requirement.

Why was White Hair Fashionable in the 18th Century?

By the 18th Century, white hair wigs were considered a sign of wealth, because they were expensive and rare. So men started to use powder to color their natural hair and wigs.

The advantage of using powder to color their hairs is that it’s more temporary and less destructive than dying the hairs.

It is very interesting to see the development of wigs, originally, wigs were used by men (just like high heels!) instead of women.

No matter why wigs were invented, I am more than grateful this amazing invention exists nowadays, it saved so many people from hair loss and light up the lives of people who want to be creative with their hairstyles.

I have written another article about where do human hair extensions come from, just go and take a look if you are interested to learn more about the backgrounds of wigs and hair extensions!