Why do English Judges Wear Wigs? 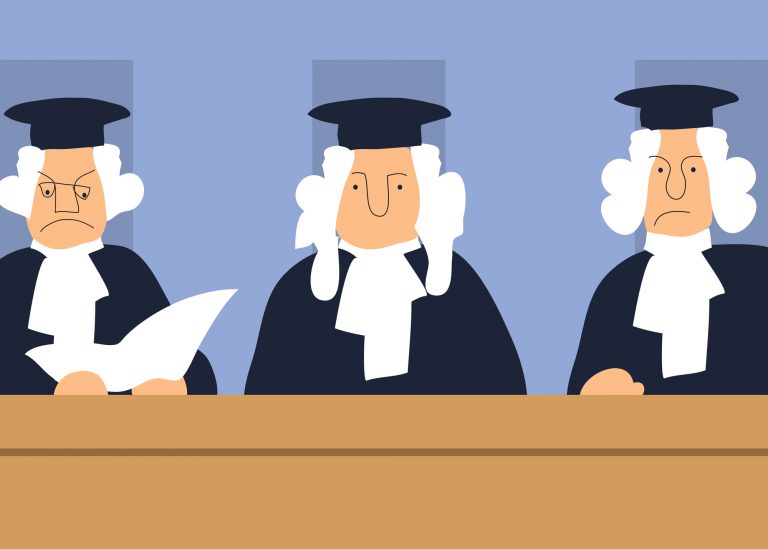 In this article, we will look at why English judges are still wearing wigs in 2022.

So, it’s the year 2022.  In some respects, we are pretty modern. There’s a till-less Amazon store that detects and auto-charges your account with anything in your basket when you walk out the door.

And we can get our milk delivered by drone.  We can even get our heart rate and fitness levels scrutinized by a watch that pays our bar tab and takes calls.

So why are British judges still wandering about with massive white wigs like it’s the Dark Ages?

My name is Bianca, and I’m a curious soul by nature. I’ve been playing with wigs, hairpieces, and installing extensions for nearly 15 years, and this thought has crossed my mind more often than I’d care to admit.

I’ve taken it upon myself to understand why, in modern Britain, the judges are still parading around with their old wigs on.

And I would love you to join me on this tour of the British history books.

So, read about why British judges still wear white wigs!

So, why did humans start wearing white wigs in the first place? Because, dear reader, humans are a little revolting.

And historically more so than modern-day, thankfully.

Powdered wigs, known as peruques back in the day, were the height of fashion for men and women for almost 200 years!

But *why* did powdered wigs become popular in the first place? Why would one want to put an itchy, sweat-inducing pile of artificial curls on top of their head?

Unfortunately, when humans started wearing wigs in the mid 17th century, it arose out of a shameful necessity. Allow me to explain.

By 1580, syphilis had become the worst epidemic to strike Europe since the Black Death. But without antibiotics, victims braved open sores, nasty rashes, blindness, dementia, and patchy hair loss to the point where baldness became widespread.

Long hair was in vogue then, and early, patchy balding was an obvious tell that someone had syphilis.

So, as you can imagine, they had to do something about it.

Question: What do you get when you combine a disease, a pair of self-conscious kings, and bad hair care?

Wigs made of horse, goat, or human hair were coated with powder (coined Powdered Wigs for this very reason) to disguise any funky aromas.

Although common back then, wigs weren’t the stylish, confidence-boosting, trend-setting statement pieces we would give our pinky toe for today.

While syphilis sparked the wearing of wigs all those centuries ago out of a dire need to cover up, it only became popular as a means to enhance social status in 1655 when King Louis XIV of France started losing his hair at the tender age of 17.

Can you imagine seeing 17-year-old boys walking around with bald spots and thinning hair?!

He was so worried that his baldness would hurt his reputation that he hired a total of 48 wigmakers to try to save face. That puts even King Kylie to shame.

Not long after that, the King’s cousin, Charles II, the King of England, did the same thing when his hair started to grey. Courtiers and other aristocracies immediately copied the two kings. This then filtered down to the upper-middle class.

Prices for everyday hairpieces ranged from 25 shillings (an entire week’s pay for a commoner in London at the time) to as high as 800 shillings! (Clutch my Elizabethan pearls!)

The more expensive wigs were coined ‘bigwigs’ for the elite lucky enough to afford the larger-than-life hairpieces.

Even after the syphilis pandemic and the two Kings’ deaths, wigs were still being worn.

Practicality, the wig trend was also the solution to another unappealing menace – headlice.

So, the lice roosted on wigs instead. It was simply more practical to delouse a wig than to delouse a head of hair. You would simply send the filthy bonnet to a wigmaker, who would boil it and remove the lice.

So, I guess we have syphilis, premature balding, and super icky creepy-crawlies to thank for creating our beautiful headpieces today!

I know, not the most glamorous start to what we now know and love as beautiful, confidence-boosting additions to our beauty regime!

When Did Wigs Become Part of a Judge’s Attire?

So when did this weird solution of wig-wearing to save face become such a massive part of a judge’s attire?

Well, even then, societal trends tended to bleed into professional settings…

Up until the latter half of the 1600s, attorneys were required to appear in court with clean, short hair and beards.

But wigs became essential to wear for respectable society during the reign of Charles II (1660-1685).

Judges donned only full-bottomed wigs until the late 1780s, when the less formal, smaller bob-wig with frizzed sides rather than curls, and a short tail or queue at the back were introduced for civil trials.

Until the mid-eighteenth century, however, barristerial wig-wearing was more of a fashion statement than a trade uniform.

And then, the Humphrey Ravenscroft (powdered) wig was introduced for barristers in 1822 and became compulsory for barristers’ uniforms.

By 1844, the basic principle had acquired recognition or enforcement under the common law. Barristers were not permitted to appear in court without wigs and gowns.

However, the use of wigs by barristers was not universal.

When you see the court clothing of a British judge, you may believe you’ve traveled back in time, but they aren’t just wearing judge wigs and barristers’ robes for fun. So why do English judges *still* wear wigs?

The truth is, clothing required to be worn by a court justice as part of his or her formal dress has not changed much since the 17th century.

But when was the last time you *actually* saw a lawyer or judge with a powdered wig?

While this isn’t a custom found in the United States (excepting historical re-enactments), powdered wigs are still an essential part of legal courtroom attire in England.

Parliament had yet to do so despite the Bar and Bench’s apparent acceptance of the wig.

In 1948, MPs considered a motion to include a provision in the Criminal Justice Bill prohibiting people from wearing wigs and gowns in court.

They argued that they feel that judicial robes and the barrister’s wig and gown are now anachronistic relics of a bygone era and that they should be discontinued.

However, in the light of arguments that wigs help to create a distinctive look in court and that criminals might not realize the extent of the law without such uniform, the motion was defeated by an overwhelming majority in 1992.

So, why do English judges in court proceedings still wear wigs hundreds of years later?

The general consensus of judges who still wear the traditional headpiece argues that the wigs bring a sense of formality and solemnity to proceedings.

Wigs are similar to many other outfits in that they are a sign of anonymity, a means of removing the wearer from personal involvement, and a method to visually tap into the authority of the law.

These headpieces are so integral to British criminal courts that it is considered an insult to the court if a barrister does not wear one.

So, what are the requirements of wig-wearing during legal proceedings?

In 2007, new dress restrictions discontinued barrister wigs, for the most part. Wigs were no longer necessary during family or civil court proceedings or when appearing before the Supreme Court of the United Kingdom.

However, wearing wigs is still utilized in criminal cases despite this fact.

Yet, British lawyers continue to adore wearing wigs, according to the Guardian in 2021. It’s helpful to wear the uniform since it avoids any unpleasant discussions if you don’t conform to physical barrister stereotypes – young, white, and perhaps male.

So, simply put – as the dress code of wig-wearing becomes outdated, more people believe it should be changed, while traditionalists think that judge wigs should still be worn to preserve tradition and enforce the law.

And there you have it!

The reason why English judges still wear wigs in 2022.

Looking back through the times, aren’t you glad you’re here now rather than a couple of centuries ago?

In fact, I don’t think it will be long now before wigs as a formal requirement for a judge’s attire will be done away completely by judges far and wide. But, the good news is that *if* they are done away with in court, they won’t be associated with a pretty brutal part of history.

And we have the forward-thinking legal professionals who abhor this tradition and what it stands for to thank for that!

Any other interesting facts all my wig-wearing fanatics just *need* to know?

Reach out to let me know in the comments below!