10 Most Influential Articles Published by Cosmopolitan.com.au 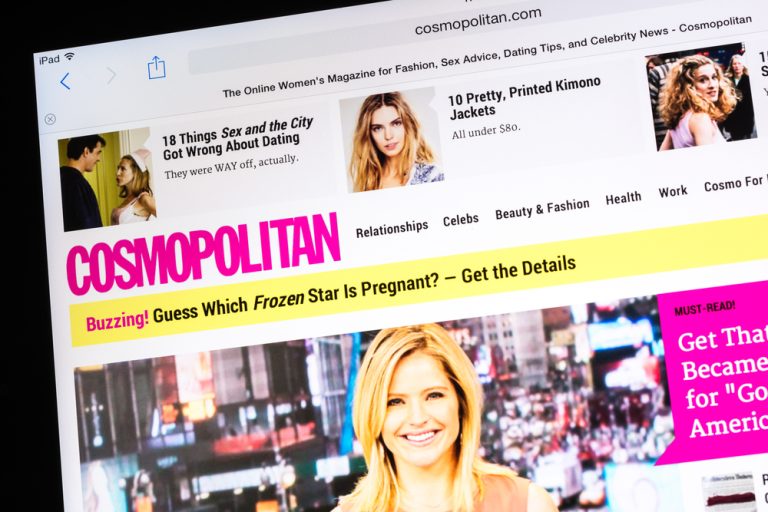 Cosmopolitan.com.au was the digital home of Cosmopolitan Magazine in Australia.

The site claimed to reach 8.3 million Australians every month.

Even though Cosmopolitan.com.au appeared online for the first time in 1999, the company that owned the site dates back to 1936, when it was called Consolidated Press. It would later change its name to Australian Consolidated Press (ACP).

Struggling to remain relevant when digital assets became more popular in the 1990s, ACP partnered with a company called Ninemsn Pty Ltd. The agreement was that Nine would handle ACP’s digital assets, and when the site was archived for the first time in 1999, the site was published by Ninemsn.

About two years after Cosmopolitan.com.au was established, an attempt to visit the website redirected to http://lifestyle.nine.com.au/cosmo. This would be the case until around 2007 when the redirect stopped, and visitors were directed straight to Cosmopolitan.com.au.

In 2012, the ACP Magazines and Nine agreed to part ways, with the latter walking away with $525m. Soon after, ACP Magazines rebranded and became the Bauer Media Group.

The Leading Articles on Cosmopolitan.com.au

We focus on the attention the article attracted from other websites. Other writers and editors link to an article they believe is good. Therefore, an article that gets the most links is perceived to be the most valuable.

1. These Hidden Hair Tattoos Are Major

This article about hidden hair tattoos was published in Cosmopolitan Magazine’s beauty section. If you have never heard of the idea, you may be excused for thinking that a hidden tattoo is one drawn on a shaved head before allowing hair to grow over it.

However, the piece defines the hidden hair tattoo as the undercuts you’ll find on the nape of the neck. It adds, “Instead of transferring a colorful temporary tattoo under there, patterns are actually shaved into the hair, and it looks way cool.”

The article states, “These designs were made for top knots and contoured necks.”

If you sell a hairbrush for $360, it doesn’t matter how good it is; the criticism will be scathing.

This article reports on the reaction to the hairbrushes Kaylie Jenner was selling. The writer starts, “A friendly reminder that the Internet will come for you if you overprice your products.”

If you are here for what was actually said, here are some of the comments:

The article reports that Jenner was unfazed by the criticism, reminding those who said mean things about her brushes that “Real brushes don’t compare to synthetic brushes.”

3. Demi Lovato Responds to Accusations of Cultural Appropriation in Her Latest Music Video

In this article, Jess Lynch writes about how Demi Lovato was subjected to controversy when she appeared in a music clip wearing what looked like dreads or locs. Some accused the singer of cultural appropriation, the act of exploiting other people’s cultures in a disrespectful and shallow way.

Lynch reports that when she heard about the criticism, the singer retorted, “They were twists not dreads. #relax … they looked fucking rad anyway.”

The same article also gives examples of other celebrities like Katy Perry and Kylie Jenner.

Lynch says that when Jenner appeared in corn rows at one time, the actor Amandla Stenberg was not impressed. She made her disapproval known, “When you appropriate black features and culture but fail to use your position of power to help black Americans by directing attention towards your wigs instead of police brutality or racism.”

This piece presents Cosmopolitan’s interview with Kate Upton, the American actress and model.

In the interview, Upton answers basic questions about how she feels when people call her a sex symbol. To that question, her answer is, “When I hear things like ‘sex symbol,’ it just makes me laugh.” We understand this to mean that she doesn’t take the whole thing seriously.

5. I Had My Lips Tattooed To Make Them Fuller

Almost everywhere you look in Cosmopolitan Magazine, Kylie Jenner seems to be somewhere in the mix. In this piece, Amelia Bowe starts by saying that her biggest fear was looking like Kylie Jenner.

In search of fuller lips, Bowe reports that she decided to get them tattooed. In the article, she shows pictures of what her lips looked like before the procedure and after. From the featured images, it’s clear that the trick worked.

For $1,195 and refreshments of color every two to three years costing $350, it better work, or it would have suffered the same fate as Kylie Jenner’s $360 make-up brushes we referred to above.

6. Ariana Grande Proves She’s An Unstoppable Force as She Resumes Her World Tour

Jess Lynch starts this article by saying a truth most of us already know: “Whether you’re a fan or not, you’ve gotta give it to Ariana Grande.”

The piece was written after the Manchester Arena was bombed during Grande’s concert. Lynch applauds Grande, who was 23 when the article was written, for her courage, and refusal to “bow down to fear and cancel her world tour.”

Lynch tells the story of added security at Grande’s concerts following the Manchester incident. She writes, “Security was understandably tight for her Parisian show, with roads surrounding the venue blocked off and a heavy police presence outside the arena, with all bags checked upon entry and sniffer dogs out in full force.”

7. 10 Ways You Are Dyeing Your Hair Wrong

In this piece, Carly Cardellion presents tips she promises will save readers from color remorse. To illustrate her point, Cardellion uses the experience of the then Cosmopolitan editor Elizabeth Narins, who went to an appointment without an idea of what color she wanted.

The writer reports that when Narins got home and looked at herself in the mirror, she wasn’t a fan of what she was looking at. To save other women from going through the same ordeal, Cardellion shares ten things you should never do when dyeing your hair:

8. Weird and Wonderful Things That Happened At the ‘Guardians of the Galaxy Vol. 2’ Tokyo Premiere

According to the writer of this piece, Jessica Chandra, if you haven’t been to a premiere in Japan, then you shouldn’t count yourself as someone that’s been to any.

When explaining why a Japanese premiere is the premiere, Chandra’s list falls short of expectations as there are hardly any seriously weird or wonderful things mentioned. She lists the following:

9. Kendall Jenner explains the importance behind her middle name ‘Nicole’

In this article, Lorna Gray reminds readers about the sad story of the demise of Nicole Brown Simpson.

Gray writes about how Kris Jenner, in an attempt to honor her friend, named her child Kendall Nicole Jenner. According to Gray, Kendall was born a year after Brown Simpson’s death.

10. 28 Life-Changing Books Every Woman Should Read

“Grab a mug of tea and maybe a box of tissues, and prepare to curl up for a very, very long time,” this is the invitation this piece makes to the reader. It then presents 28 books it promises will change your life.

The article categorizes books into different sections, including for those going through a breakup, those who want their heart to melt, those looking for motivation and inspiration, just need to escape, want to gain a deeper understanding of feminism, grieving, and anyone going through a hard time and looking for a voice that understands.

What Then Happened to Cosmopolitan.com.au?

On October 16, 2018, Rebecca Sullivan of Australia’s New.com.au reported that Bauer Media announced that it would no longer publish Cosmopolitan.

Sullivan quotes a statement from Paul Dykzeul, the then-CEO of Bauer Media ANZ, who said, “Today, Bauer Media announced the closure of the Cosmopolitan brand in Australia, with the December issue being the last.”

Dykzeul adds, “We are incredibly proud of the brand and the people who have been involved and represented over the last 45 years.”